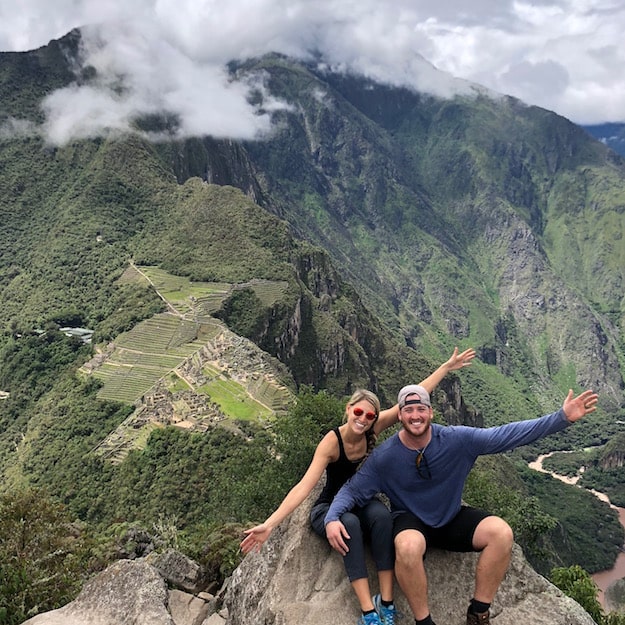 Sometimes you just have to drop everything and go, and what better time to go than when you're young and in love?

Claudia and I were married on December 29th, 2017, and, thanks to Wanderable and our closest friends and family, we embarked on a two-month, three-country honeymoon on January 2nd.

We chose Peru, Bolivia, and Colombia because 1) we are both Spanish speakers; 2) we wanted less tourist, trendy destinations where we could be more active; and 3) we can't visit Claudia's home country of Venezuela due to current political issues.

Below are the Top 10 things we learned.

When you're traveling in the developing world and trying to be adventurous, you tend to do things (and eat things) that can get you into trouble.

In Lima, we tried a 17-course tasting menu at a restaurant called Central and stayed in an Airbnb with a shared bathroom; we ate piranhas, octopi, and seafoam, among other things. Lima is the best place to eat on the continent, but it's not the best place to go to the bathroom, especially not in an emergency situation. That's when you get over your squeamishness with your spouse and some of their most unpleasant bodily functions. You have to. You've entered into the sacred bond of holy matrimony in sickness and in health, and if you're not down with the sickness, you get over it real quick.

I'll never forget the look on my wife's face when I got into our tent after a long day of hiking on the Inca Trail. All she said was "You smell," but her face said, "I am MARRIED to that smell?"

That was early on in the trip. We got used to it all by the end, and that's love, I tell you.

9) Saving and budgeting are easy even though currency math is hard.

Between Peru, Bolivia, and Colombia over the course of two months, we had budgeted about $6,000, or $3,000 per person. We took more buses than planes and stayed in Airbnb’s wherever possible.

Each country has its own currency, however, and each currency has its own conversion rate. In Peru that rate is about three soles to a dollar. Bolivia's boliviano is about 13 to one, and Colombia's peso is a whopping 2800 to one.

Math has never been my strong suit, and I was constantly overreacting to restaurant menus in Colombia. "They're charging WHAT?" Oh wait...that's reasonable." Luckily Claudia was there to correct me. I'm very glad to be back in the United States where there's much less math to do. 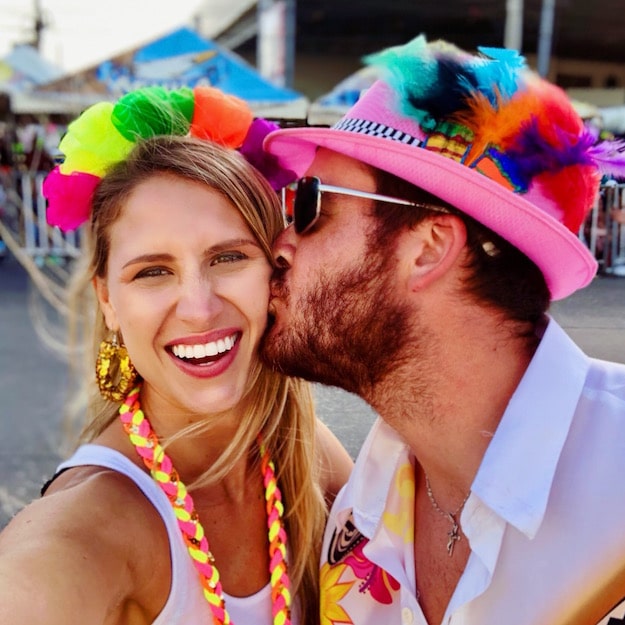 8) Altitude sickness is real, and it is NOT spectacular.

We spent much of our trip in the Andean highlands of Peru and Bolivia. After departing Lima for Cusco on January 7th, we were at least one mile above sea level until we arrived in Medellín on February 1st. That included, Cusco, Machu Picchu, Lake Titicaca and cities on both sides of the Peru-Bolivia border, and La Paz and other cities in Bolivia. We got very familiar with altitude sickness and its symptoms. Those include shortness of breath, headaches, nausea and exhaustion. You react to it like this:

Eventually after a nap, you do feel better. You're body adjusts. We got to the point where we were able to complete the Inca Trail to Machu Picchu, and we were the fittest couple in our group (not so humble brag). When we finally got back down to sea level, we were ready to run a marathon (just kidding).

7) Llamas and alpacas are for petting, not for eating.

In the United States, we eat a lot of cows and chickens and fish, and that's normal to us. In Peru and Bolivia, you see more llamas and alpacas, so it shouldn't surprise us that they eat those animals (but it did surprise us anyway). We tried the local delicacy and just felt terrible. We also ate guinea pig in Peru. It's supposed to have health properties, but all we could think of was someone's pet. So we learned a lesson that even when we're in a foreign country, we can't just eat what they eat without feeling a gut full of guilt and goodness knows what else.

Colombia is a country that has been in a constant state of civil war since the 1950s. Paramilitary groups on both sides of the political spectrum have perpetrated horror after horror within its borders. Then in the 70s, 80s, and 90s, drug traffickers held the country hostage.

In Medellín, the home town of Pablo Escobar, our English-speaking tour guide wouldn't even say his name. She called him Voldemort. The point is, the wounds in Colombia are so deep even decades after Escobar's death that no outsider can truly understand. The government only recently signed a peace treaty with left wing paramilitary forces. Narcos is awesome, but don't think that means you've learned (let alone experienced) anything from it.

5) In Barranquilla's Carnaval they do it for the culture, not a second-rate show like other places in the world.

Conjure up your thoughts of Fat Tuesday, Mardi Gras, Carnaval, and you probably think of an alcohol-fueled club romp on the open streets of Rio or New Orleans. We even have themed restaurants where the holiday is synonymous with 21-and-up party time. According to the UNESCO World Heritage program, Barranquilla has the largest Carnaval celebration on the continent outside of Rio de Janeiro. So we put on our party pants and went to Shakira's hometown ready to let the she-wolf (or in my case he-wolf) out of the closet. Don't get me wrong: it was a blast. We stayed in an Airbnb with a Barranquillera, though, and she gave us the low-down. The focus of the holiday in Barranquilla is much more of a cultural celebration of Colombia's history through costume and dance. The costumes are beautiful, the dancers are even more beautiful, and the crowds are certainly there to celebrate, but they're also there to appreciate and not just to party. We highly recommend you go, but know this before you go.

4) The jungle is loud

In Bolivia, we visited Madidi National Park, which is located in the rainforest near the town of Rurrenabaque, and while there we stayed in a tree house. The tree house had a wood roof and floor and in between those two was not much more than mosquito netting. We heard howler monkeys, bird, and flying bugs that sounded like something of prehistoric proportions was outside ready to carry you off. We could hear large animals, both prey and predators, stalking through our camp site. It was really something to hear the world wake up (and never really go back to sleep). We got used to it all, and it was one of my favorite memories. 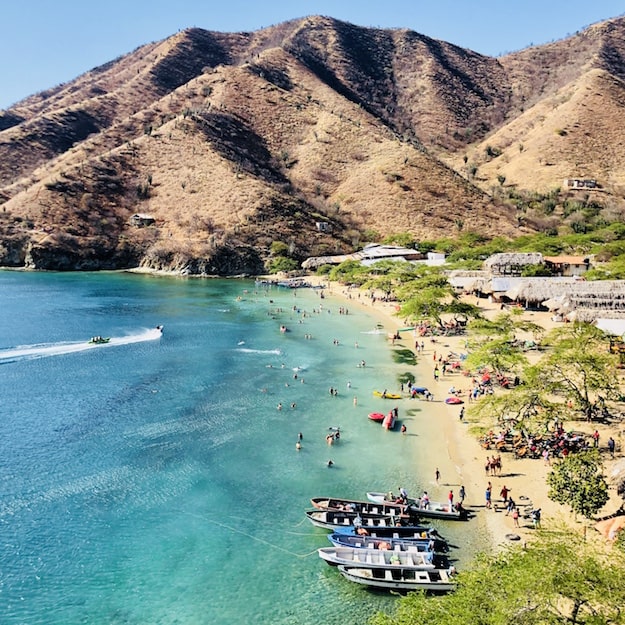 Also in Bolivia, we visited the Salar de Uyuni, the world's largest salt flat located in the southern part of the country. It's more than 4,000 square miles of flat salt desert. During the rainy season, the salt is covered with just enough water as to be reflective like a mirror. It's great for pictures, but it's terrible for your skin and everything you own.

The vehicles that drive you through the Salar have to drive at 10 mph or below to avoid splashing salt water on their undercarriage, which will cause rust. Salt water gets in there anyway, however, so each vehicle has to be scrubbed with fresh water after a day's ride. We now have a useless GoPro mount that rusted together after a day in the salt flats. Our hair and skin and clothes had white salt residue all over them after splashing around in the ankle-deep water and falling while trying to take cool pictures. We even stayed in a hostel where the walls and floor were made of salt, so there was no escape. Totally worth it, but beware!

Colombia has two world famous exports: one is illegal and the other is coffee. We visited the Coffee Zone and towns like Quimbaya and Armenia, and we stayed on a coffee plantation where we picked our own coffee beans and rode horses through the coffee bushes.

But even outside of Colombia there's plenty of coffee, and of course it is worth drinking. Coffee need not be limited to breakfast, either. It's a great excuse to sit, take a break, regain your energy, and get free WiFi! Throughout our trip we began planning our free days around coffee shops, and that was a pretty good way to plan a trip, to be honest.

Without hesitation, our favorite stop on the trip was the Inca Trail to Machu Picchu; not either/or; both! The trail is an incredible challenge. You hike, you climb, you carry, you camp, and you do it all in some very harsh conditions.

On Day 2, we went to sleep in the rain at two and a half miles above sea level and awoke to snow covered mountains. By the end of that day we were a mile lower and airing out our dirty clothes (and bodies) in the sun, relaxing with no shoes on. Multiple members of the hiking group had themselves a good cry. But once you get to the Sun Gate and get your first look at the sacred city, you fee this sense of accomplishment and joy. You made it! WE made it.

Our trip was the trip of a lifetime. We had many destinations included in one long journey. In marriage, in life, we believe the journey and the destination have the same goal: happiness together. Thanks to Wanderable and to our family and friends that contributed, we have had a wonderful start.